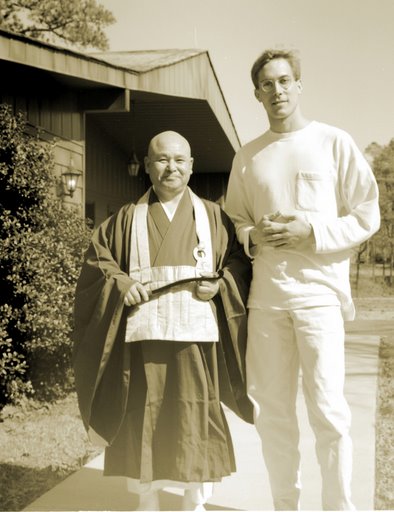 In 1989 I had the incredible good fortune to study under Keido Fukushima, Zen Master, and Abbot of Tôfukuji Zen Monastery (Kyoto, Japan).  Master Fukushima came to the US to lead a weekend retreat at The Oasis Renewal Center, an ecumenical spiritual retreat center where I worked as the resident manager in Little Rock, Arkansas. At that time I had been living at the retreat center for about a year in a small log cabin. Just me and my dog, Amber.  Usually it was just Amber and me on the 41 acres after working hours, but on some weekends we had overnight retreat leaders and guests on the grounds. It was at Master Fukushima’s retreat where I was introduced to meditation in the Zen tradition.

His nickname, the Laughing Buddha, is apt. He was almost always smiling and on the verge of either giggling or belly-rolling laughter. He took pleasure in calling my fellow retreatants by nicknames he coined on the spot. He looked up at me and said, laughing of course, “Tall Buddha! Hee, hee, hee.”

He not only laughs at his inner muse, but he has a sense of humor anyone could appreciate. For example, many students asked questions through his translator, and he solemnly replied in Japanese while we waited for the intermediation of the English translation. Then at one point he grew weary of that, apparently, and laughing, lapsed into perfect English and conversed directly with the group to our astonishment and puzzled delight.
–Karl Straub

Fukushima Keido (March 1, 1933 – March 1, 2011), was acknowledged as a Zen master in 1974,  was appointed vice-resident abbot of Hôfuku-ji where he began to train his own disciples. In 1980, he was appointed master of the Tôfuku-ji training monastery (senmon dôjô 専門道場) in Kyoto.  Elected head abbot (kanchô 管長) of Tôfuku-ji  in 1991, supervising 363 affiliated temples.

There is a book about hime called The Laughing Buddha of Tofukuji by Ishwar Harris.

Book description from the Publisher: Combining the central teachings of Roshi Fukushima’s Zen with illuminating biographical details, Harris’ book serves both as a wonderfully fresh introduction to Zen for Western readers and a compelling biography which conveys the radiant spirit of one of the most remarkable spiritual masters of our time. This book is as much about understanding Zen as it is about the life and work of Keido Fukushima.  Harris first came into contact with Fukushima, a Rinzai Zen monk, in 1973. The Laughing Buddha of Tokufuji also contains numerous photographs of Roshi Fukushima, and six original calligraphies by the Master of his most well known Zen Koans.

See if you don’t find yourself breaking into a broad smile and beaming with delight every now and then as you read through this account.

About the Author
Professor Ishwar Harris is a professor of religion, an expert on India’s culture and civilization, an author of books and articles, and a musician. He has devoted his career to studying Eastern religions, particularly Zen Buddhism, though he is also very knowledgeable in Hinduism, Buddhism in general, and Islam. He currently is the Synod Professor of Religious Studies at the College of Wooster in Ohio, where he has been since 1981.

Excerpted from The Laughing Buddha of Tofukuji : The Life of Zen Master Keido Fukushima (Spiritual Masters) by Ishwar C. Harris. Copyright © 2004. Reprinted by permission. All rights reserved.
Roshi Keido Fukushima’s eyes glow with excitement as he narrates the story of the rebuilding of the Kin Zan temple complex. There is no doubt that this project is one of the great achievements of his life. The first thing to be constructed was a road in order that the people could come up the mountain by automobiles. Slowly the construction of the main complex began. The Buddhists of Koshu City began collecting money and the resources to aid in the project. In 1999, Tofukuji in Kyoto celebrated 750th memorial services for the master Bukkan and invited a large delegation of the Chinese Buddhists to attend. In May 2000, through the efforts of the Roshi, 270 Japanese Buddhists visited the Kin Zan temple together. Presently the construction of the main complex, including eight big halls, has been completed. Roshi Fukushima is pleased that some lay people are beginning to come to the temple for ceremonies. Although currently there is no resident priest there, there are ten monks who live there. The images of Sakyamuni, Bodhisattvas, and other deities are in the process of being enshrined. To the Roshi’s amazement, small villages and some shops are beginning to be visible in the vicinity. He sees that “as a good sign for the future of Kin Zan’s development.” It was a momentous occasion for the Roshi when, on May 9, 1986, Prince Charles visited Tofukuji. He found the Prince to be “utterly charming and most delightful.” Prince Charles was inquisitive and wanted to learn about the monastic life and sitting meditation. Roshi Fukushima seized the opportunity to give him a tour of the temple complex and also to tell him something about Zen. When the discussion centered on the monks, Prince Charles reportedly commented, “So they are training to have an empty mind, aren’t they?” The Roshi remembers, “I thought, this is the chance. I passionately explained to him that the heart of Zen is mushin. It is usually translated as ‘empty mind’ or ‘no mind’ but that is not enough. I told him that when our mind is empty, we can accept and react to anything freely. So it is more appropriate to say that mushin is free mind, fresh mind, and creative mind.” As they walked toward the main Zen garden, the Prince saw about twenty Zen monks and students meditating. He exclaimed, “Oh, wonderful!” He asked the Roshi many questions about Zen, which the Roshi answered. As they reached a porch, the media asked them to pose for a picture. The Prince was concerned whether this was a place of meditation. With his sense of humor, Keido responded, “No Sir, this is where you get your pictures taken.” Both had a hearty laugh. Prince Charles overstayed his designated length of visit by fifteen minutes and enjoyed his tour. As they pleasantly parted company, Roshi Fukushima remarked, “Please come again and let us do zazen together,” to which the Prince responded, “That is a good idea.”