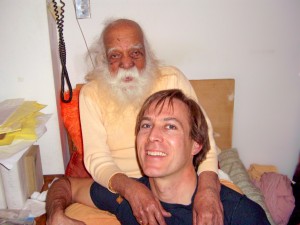 I had heard of Swami Bua from yogi friends, and found to my great surprise, that his home is on the same street just one block away from my own apartment where I lived in Manahttan for over 5 years. When I first met Swami Bua, he interviewed me and a friend, asking out occupations, health, etc. When my friend and I mentioned that we both “teach yoga”, he made a face of surprise and said “Oh, my God! Two yoga teachers! Oh, I’m just a student!” We were, of course quite humbled by his good-natured jesting. Then he went on, “I do not teach yoga. I teach how to get to Heaven.”

The following is from an article in Hinduism Today:
Swami Bua’s spiritual path is based entirely on scriptures. I don’t follow anybody’s teachings,” he says. “My method of meditation comes from the Bhagavad Gita.”

Swami Bua says to know meditation, you must experience it. “We can teach, but we cannot reveal what it is.” He compares meditation to the experience of tasting honey. “Honey is sweet, but when I have not tasted honey, how can you explain it to me? You can say it’s like sugar. But if it’s like sugar, why not just eat sugar? When you experience [meditation], then you know what it is.”

Starting in 1990, Hinduism Today has honored one saint each year who has most impacted the faith and spread its values, compassion and profundity across the globe. Past renaissance winners are: Swami Paramananda Bharati (’90), Swami Chidananda Saraswati (’91), Swami Chinmayananda (’92), Mata Amritanandamayi (’93), Swami Satchidananda (’94), Pramukhaswami Maharaj (’95), Sri Satya Sai Baba (’96) and Sri Chinmoy (’97). For his long life of service and continuing pioneering work for the Hindu dharma in South America and elsewhere, Swami Bua was the choice for 1998.

Swami won’t reveal his age or anything else that is personal about himself, and there is no independent verification for his devotees’ claim. But Hinduism Today publisher Satguru Sivaya Subramuniyaswami first met Swami in Paris in 1969, and Swami was at that time easily in his 70s. Then, as now, this accomplished hatha yogi was in the best of shape, able to blow a conch for several minutes without taking a breath. His intellect and sense of humor remain keen. During his long life, he has met Swami Sivananada (in 1930), Mahatma Gandhi, Rabindranatha Tagore, Theosophist Annie Besant and Subramuniyaswami’s guru, Siva Yogaswami of Jaffna, Sri Lanka.

Swami has lived alone since 1972 in a modest apartment in New York City near Central Park. The living room is his yoga classroom where small groups of students gather daily for instruction in hatha yoga and meditation. Though he lives on a mostly liquid diet of vegetable and fruit juice, Swami loves to cook. When last we called him for this article, Swami Sahakradharananda from Nepal had just arrived to visit, and Swami had to end our conversation to prepare dosai for his guest.

He won’t say much about his past, except to tell one story from his childhood. “I was the 16th child of my parents, having 12 brothers and 4 sisters,” he said in a 1982 interview with Hinduism Today. I was born crippled and remained so until I was ten. Then a doctor predicted I would die. I did die, or so they thought. They took me to the cremation ground and put my body on the pyre. As the flames were lit, my body began to shake. By 17 I had regained my health, but my family would not take me back.” Swami has lived as a strict sannyasi ever since.

“No special practice is necessary for God Realization,” he told us. I see God everywhere. If God is not there, how do so many things happen?” “My contention is that sickness is sin,” Swami went on. “Don’t kill other animals, don’t make the belly as a burial ground. I teach hatha yoga, but I don’t subscribe to the idea that hatha yoga is a physical gymnastic exercise. ‘Restraint of the modifications of the mind’ [according to Patanjali] is yoga. Altogether there are eight limbs. Yama, moral restraints, is a step. When are you going to perfect your yama? How many lives is it going to take? When are you going to perfect your niyama, spiritual observances? When are you going to perfect your pratyahara, drawing in the forces of the mind? It takes time. And so has Swami been direct and outspoken throughout his life, and well deserved to be named “Hindu of the Year” in 1998.